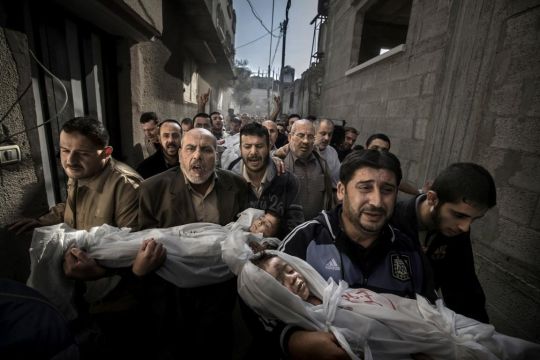 The question about making a living on other people´s utter misery surfed up and the discussion was twofaced and moralistic because preying on misery was regarded as unethical but to ignore the conditions in the ”third” and ”fourth” world was equally despicable. As a Red Cross delegate and later an UNHCR advisor this moral dilemma has always been a reality for my colleagues and me..When the article”The Lords of Poverty”, a furious attack on the top positions limitless greed and quest for luxury, was published we were all appalled and confused. The corruption and inner mismanagement of some of the most prestigious organisations in the world, like the "Emperor Without Clothes” was there for everyone to see. The only good that came out of the revelation was the ideological discussion of the substance of charity and local development work in collaboration with local people and the ecological niche, although the obvious still is far from accepted in the establishment.

Since the credo still sang the mantra of under-developed countries, we were led to believe that the nations were backwards and poor because of stagnant sociobiological development with racist undertones, miserable governmental tools, domestic exploitation and corruption. The third world was regarded as being stuck at a socioeconomic step on the development socioevolutionary ladder and expected to ”develop” with assistence, charity and political Occidental know-how, which was considered to have progressed from the state of malnutrition and political autocracies by benevolent colonialism and marketbuilding, that is ”legal mercantile” exploitation to put it bluntly.

The picture of the year , taken by the Swedish famous photographer Paul Hansen, which depicts the funeral rites of two siblings gased to death in Aleppo has caused a sensation for various reasons.

Are you, as a ”neutral and objective” journalist/photographer, respecting decorum when you seemingly calm hold your stand in order to take a sensational realistic photo? This quitessential question has been discussed but only to be overshadowed by quarrel with regards to if the photographer has photoshopped his phot, ot not. As it happens, he hasn´t..

Returning to the question of how to execute your trade quality- and morallywise, an excellent documentary was shown yesterday on national Swedish TV, shedding light on the most famous reporters and photographers from Oriana Fallaci and forward, candidly showing the individual obssession of the reporters to be the most daring, to be just about everywhere where atrocities are ongoing in a half-craze adrenaline boosted haze and to shove the cameralenses up the faces of the dying or screaming, to display severed limbs and corpses en masse.

Many years ago I stayed with a famous Argentinian Documentary director, exiled in Sweden, but residing in Mexico. He had an impressive arsenal of the State of the Art photographic equipment, sponsored by Hasselbladh, and cameralenses 100 centimeters long. I had a cheap camera which required no fast movements or long distances to the object of my interest. This, however, was not welcome. The native indians, whether politically active (the whole region was turbulent with coup d´états and rebellion) or peaceful and submissive ordinary civilians, showed rage and hostility, unless I had approached them beforehand, paid them a fee and take my photograph, which, of course, turned out as spontaneous and authentic as that of charter tourists at the poolside of Gran Canaria sea resorts.

If caught taking a photograph without permission you were not only being offensive but actually in danger. As reminiscence of a strong native creed spread fron the North American Indian tribes to the Tierra del Fuego that the camera would capture and steal a person´s soul, considerably and pragmatically adapted to the few extra centavos earned by the increasing amount of gringo tourists, you had to respect the governing etiquette.

In the documentary sent on Swedish television, two highly respected war correspondents both female, focused for a while on a dilemma with regards to photographing individuals who could not give their permissions weighed against their commission to depict the truth no matter how cruel, I found that the issue is as important an ethical question as fiftyfive years ago. There is no precise answer.

I found it less surprising that both of reporters lived a life with heavy bouts of depression and anxiety, Post-Traumatic-Stress-Syndroms and severe difficulties to adapt to an non-hostile environment and reasonably secure domestic residence and family life without constant hyper-vigilance, paranoia and mental exhaustion.

This I can relate to. No hospital in Sweden would ever admit that my colleagues and I could suffer from PTSD, because we have not been visibly tortured, violated and physically abused. The lengthy periods with the threath of snipers, of the bullets passing close by, suicidebombers, grenades and bombs, a hostile population and the constant verbal threats that all protection or reliefworkers endure, is regarded as a professional hazard. And it is.

People in Syria, according to the two female correspondents and the Swedish photographer duly agreed that they often are filled with remorse and disgust for themselves and seldom or never at peace with themselves. They, however, made intersting comparisons with relation to what different peoples accept some who even wish for photographers to document their despair, as in the photo from Aleppo, contrary to most populations in many of the North African nations and in the selvatic region of Amazonas who´d attack you if you are found out since you often are expected to collaborate with the oppressors, which actually may be the case, since you may have to accept the omnipresence of security forces, militaries and para militaries

Lately various documentaries following the dying on Swedish hospices, with their permission, of course, has led to another heated debate. Are the dying in a condition to make a rational decision ? What about the ”Law of Discretion” which governs all medical care? What can we allow us to do, no matter how ”noble” the intention, when the individual rights are being deliberately ignored. And what, on the other hand, will happen if we choose to ignore to observe and inform?

The question of an emotional and visual densensitization has already been addressed. How much more can we take in ? What are the collective emotional responses to the representations of a world with endless cruelness.

Anyway, it will only be a matter of time before the Internet and the smart TV can be programmed to avoid and erase upsetting and violent newsflahes of reality. I fear, however, that nothing will be done when it comes to the playstations and all the interactive IT programs that rest on "entertaining" violence only.

Nästa inlägg: TO COPE WITH THE CURTAINCALL