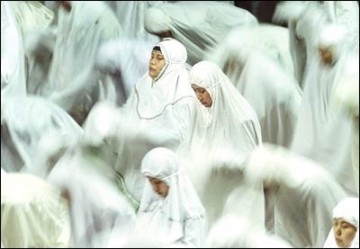 Yesterday the true agenda of leading imams in Sweden was revealed in a shocking documentary shown on the national swedish television- The double standards of the religious leaders were embarrasingly evident.

A team of two swedish reporters interviewed the ten most prominent Muslim Imams residing in Sweden and who continuosly are being consulted by the government and swedish authorities on issues such as honor related violence, forcible subjection of women, clitoridektomi. infibulation, corporal punishment of spouses, partners or children, rape within a marriage, polymagy and the concept of obedience. The interviews were openly filmed with the consent of the religious leaders. The Imams publically advocate a moderate Islam and a sworn loyalty to the swedish legislation and their immpecabble adaptation to our Civil Law.

A couple of weeks later two Arab Moslem women, covered by the traditional Niqab, approached the same Imams with the same questions. This time the consultations were being filmed and recorded in secret. The women asked for the advice of the imams regarding domestic violence, physical abuse and rape by their husbands, polygamy, infidelity, the demand for submission and obedience no matter for what reason, and lo and behold, the advice given was completely opposite to what the swedish reporters were being told

Let us first make something abundantly clear: Sweden is a secular nation. There is no such thing as a national religious legal framework which governs the civil law.

Freedom of religion is a principle that supports the freedom of an individual or community, in public or private, to manifest religion or belief in teaching, practice, worship, and observance; the concept is generally recognized also to include the freedom to change religion or not to follow any religion. The freedom to leave or discontinue membership in a religion or religious group —in religious terms called "apostasy" —is also a fundamental part of religious freedom, covered by Article 18 of the Universal Declaration of Human Rights

These rights are being respected as far as the sense of what is to be understood as a paramount human right but stops at obvious criminal offense. If the provisions of a particular religious law collides with the national civil law, which rests on the different Conventions on Human Rights, the civil law prevails. Marriages which involve individuals minor of age or forcible marriages are forbidden. Citoridektomi is forbidden. Physical violence, rape and maltreatment in a marriage whether carried out by a spouse or a partner in a partnership, no matter the gender of the offender, is forbidden. Physical punishment or psychological abuse of children have been forbidden since four decades.

Domestic violence is not uncommon and shamefully frequent in all ethnic or cultural backgrounds, including native Swedes. Raping a spouse or a partner occurs in all social groups and can be found in any nuclear och extended family group. The physical or psychological abuse is often hard to evidence base in a legal process and inter-marital rape close to impossible to prove in a legal trial unless the victim instantly alarms the police authorities, the social auhorities and hurries to a hospital for DNA tests and other medical examinations. If the swedish born victims hesitate or fear to take these measures, it is an even greater challenge for foreign born nationals or refugees who often are closely surveyed by their fellow countrymen.

It is a well known fact that a majority of the victims, men or women, will keep quiet for fear of repercussions and increasing violence by the offender in addition the social and emotional stigma of making public the interdomestic conflicts. The reaction of the social entourage may not be supportive of the victim for a variety of reasons. The withdrawal of accusations are very common. We also know that domestic violence is protected from legal sanctions because the victim puts the blame for the maltreatment on her/his own person.

Even if a verdict may result in imprisonment or a restraining order the verdict often causes social repercussions and exclusion for the victim to last her or him for a lifetime because of the normative mindset of the public or in a defined group.

Obedience, submission and subjection is by no means a Muslim tradition only. This pattern existed long before the gradual development of the Abrahamic three religions. Polygamy as a family reproductive unity has been known since the beginning of time and started out as a functional reproductive mode of survival of the common people in societies were the means of survival were scarce with constanly ongoing battles over the resources which results in a shortage of men being killed in the conflicts. The Abrahamic religions reflect the Nomad or semi sedentary societies they sprung up from and the canon, (unofficial legal system) survives even when the niche or the mode of livelihood changes considerably and shortages of the reproductive means have been aborted.

I am no expert but I belive that the Prophet said that if you cannot support a first wife you should not take a second. This allows for affluent men to show off his riches by marrying multiple women and is common globally in different contexts and historical eras and is by no means a Muslim tradition solely. The sovereign´s multiple partners or wives, be it male or female, from the Harems and the Chinese or Asian concubine system to the menage of Catherine the Great of Russia and pre Columbian Incas have been the optimal show pieces of grandeur and power.

The double standards of the prominent Muslim leaders in Sweden who ordered the Niqab dressed women to obey their husbands, submit to their sexuals demands whenever they felt the urge by showing affection (sic!), to accept the presence of multiple co-wives and to tolerate physical and psychological abuse whereas stating the opposite when interviewed by Swedish reporters, has caused a thunderous havoc, and rightfully so, in Sweden. We will not accept brutal gender differences, mutilation of the vagina or marriages between adults and minors of age under the pretextes of religious freedom.

The anti-Islamist and ultra right xenophobic movements are rapidly growing in Scandinavia and currently intensified, triggered off by the massmurders in Norway with xenophobic overtones. The hidden agenda of the Imams in Sweden will result in a further polarization between Muslims and non-Muslims in Sweden. The concept of a ”Euro Islam” will be questioned.

Tolerance must not be confused with indulgence or Laissez faire. Swedes are internationally known for their conflict phobia and this stereotyping is absolutely accurate. What we choose to call tolerance often is a way of turning our heads in another direction while grinding our teeth, whereas civil disobedience is almost the national favorite pastime in our neighbour country Denmark.

Violence in the name of God, Allah or any other god is repulsive to me. The idea that a Creator endorses violence versus the vulnerable is absurd. To maime, slaughter, rape and abuse to assist a divinity is revolting. The divinity is surely capable of taking care of him or herself.

The television crew went to Britain to consult the Imam of one of the world´s most fundamentalist Islamic sects, a Somali congregation or umma, on the same subject matter. To their astonishment the omnipotent Imam firmly stated: A woman or a family member must never accept violence or maltreatment and should instantly report it to the police authorities. He repeated this to the Niqab dressed women a month later and he demanded that they should defend their human rights and that in the eyes of Allah all are created equal. He also stated that British Law must be followed to both crews.

Am I an Islamophobe? Of course not! In my line of profession I have been working with multitudes of colleagues and victims of Moslem faith for decades. Very few of them have condoned violence as a means to practice Islam or to be used in Islamic missionary endeavors. The core of the creed I understand as submission to Allah, not submission to other humans. Obedience is rather a matter of genuine respect for wisdom and experience.

The obvious deceit by the prominent Imams in Sweden must not be ignored or be tolerated unless we agree that domestic violence in the name of God is a universal right. This may, with any luck, have spin off effects and encourage us to survey all forms of domestic violence, secular or religious, which is shamefully neglected and far too often regarded as a private affair even if there is an extended set up of laws to come to terms with it. If we do little to implement them, why have them?

Outstanding quest there. What happened after? Take care!

Föregående inlägg: BEING GAY OR HAVING A LARK ?